www.standingstones.org is a resource site for people who want to study Archaeoastronomy for Stone Circles, Standing Stones, Stone Rows and Henges.

www.StandingStones.Org providers a viewer to display the historic rising and setting points of the Sun and Moon - Viewer

Archaeoastronomy (also spelled archeoastronomy) is the study of how people in the past have understood the phenomena in the sky, how they used these phenomena and what role the sky played in their cultures.

www.StandingStones.Org providers a viewer to display the historic rising and setting points of the Sun and Moon - Viewer

The viewer has data accumulated from around 4000 sites across the UK and Ireland and many others from the rest of Europe including many Stone Circles, Standing Stones, Stone Rows and Henges.
The viewer uses uses the SRTM (Shuttle Radar Topography Mission) based data. Within the UK, the SRTM data is augmented with the Ordinace Survey (OS) based 50m map data. For Latitudes above 60 degrees (Shetland is mainly north of this) then OS data only is used.
The SRTM data is easier to process and generally produces cleaner results than the OS data although the SRTM data sometimes can vary from actual maximum heights by around 20m due to an average being taken across a tile (For instance, the SRTM tile for the summit of Snowdon is 20m below the top). The OS data is composed of 10M contour lines so provides better accuracy on steep slopes while the SRTM data is probably more useful on less steep terrain and hence both are used in conjunction. Spot heights where shown are from the OS data.

More details on most of the sites can be found at The Megalithic Portal.
Another useful reference site for many sites is The Modern Antiquarian.
Studies of the Stones Rows of Britain The Stones Rows of Great Britain.
Megalithomania.com includes all sorts of historic and prehistoric sites across Ireland, including Neolithic, Bronze Age, Early Christian and Medieval monuments. Megalithomania.com.
Lunar sites Scotland. It is interesting to compare the site in the Thom's long solstitial alignments article with the same sites in the StandingStones Viewer (Ballochroy and Kintraw)

The following are example images taken from a Circle in Scotland (Syre - Grid Ref NC680430) and show how the location could have been used to observe the sun and moon at different positions.
The Winter Solstice setting of the sun

The goal of the viewer is to show the view from a monument and overlay the rising and setting positions of the Sun and Moon.
The site attempts to make study of these sites easier and provides a generally accurate representation of what could be observed historically from a site.
For the Sun, the Winter and Summer Solstices and Equinox positions are shown
For the Moon the Major and Minor Lunar Standstill are shown (+E+I, +E-I, -E+I and -E-I)

A solstice is an event occurring when the Sun appears to reach its most northerly or southerly position. The Solstices take place in Winter (about December 21) and Summer (about June 21)
An equinox is the moment at which the center of the visible Sun is directly above the Equator. The equinoxes take place in Spring (around 20 March) and Autumn (about 23 September)

The Viewer can also use LIDAR data for UK locations which is published by the Environment Agency which is part of DEFRA and the Welsh Government and Natural Resources Wales. At present LIDAR coverage for England is around 60%, mainly covering river valleys and areas with a higher flood risk. Most higher land is not mapped which limits the usefulness but hopefully over time the coverage will improve - Environment Agency has announced plans to map England’s entire landscape by 2020 Mission. So far not had the time to look into the Scottish datasets.
Some of the images are created using data from public sector information licensed under the Open Government Licence v3.0. (Open Government Licence (OGL)).
An example of where the LIDAR difference makes a significant difference is the view of the -(e+i) moon set over Hog Lowe Pike from Thirteen Stones Hill. The LIDAR based image is processed from the 2m LIDAR dataset and shows the additional details that are available.
Moon Set over Hog Lowe Pike from Thirteen Stones Hill rendered from LIDAR data. 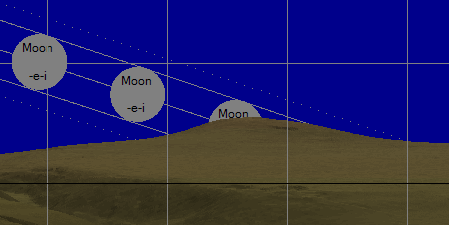 The Viewer also contains links to GPX files for each location. These files allow you to see where on a map the various rising and setting points of the Sun and Moon are. This allows you to pinpoint a foresight such as mountain or hill where the event occurred.
On Windows 10, you can install a GPX viewer with the following link. Other web based viewers are available such as Ride With GPS.

Elevation and Azimuth of the Sun/Moon

Formula for calculating the Elevation and Azimuth of the Sun/Moon
https://astronomy.stackexchange.com/ questions/1855/how-to-get-the-longitude-latitude-from-solar-zenith-azimuth
When doing this, I assume that the earth has a circular orbit when calculating the size of the sun to draw and similarly for the moon.
Equinox positions are calculated at the true equinox and not at half the number of days between solstices. The different between the two approaches means that the ancient equinox positions may well have been somewhat different ot he true equinox position.

Parallelax for both the sun and moon is calculated although only the values for the moon are significant. Only the mean parallex of the moon is used which at the horizon is about 57′. The Parallelax variation due to the moon's eliptical orbit can vary by around +-3′ but this is not currently displayed
https://en.wikipedia.org/wiki/ Orbit_of_the_Moon

The formula for Refraction is the following Sæmundsson equation, taken from the wikipedia page which is accurate to around 0.1′ at 10 °C https://en.wikipedia.org/wiki/ Atmospheric_refraction

The moon has an additional wobble with a 173.3 day period of approximately +-9′ - this is displayed on either side of the moon as a series of dots.

The main formulas used when calculating what to draw is the Aviation Formulary and Haversine formulas
from: Ed Williams' Aviation Formulary
https://edwilliams.org/avform.htm
Haversine formula is used to Calculate distance (in m) between two points specified by latitude/longitude (in numeric degrees).
https://en.wikipedia.org/wiki/ Haversine_formula
Landscape dip and teresstial refraction
The dip is calculated simply based on distance and curvature of the earth and then adjusted following the R′ = R × 7/6 formula.
https://en.wikipedia.org/wiki/ International_Standard_Atmosphere
https://www.metabunk.org/standard-atmospheric-refraction-empirical-evidence-and-derivation.t8703/#post-205947
https://aty.sdsu.edu/explain/ atmos_refr/horizon.html

Conversion of spot heights and contours from the grid reference system (OSGB-36) to Lat/Long is using formulation implemented by Thomas, Redfearn, etc and is as published by OS.
The following is a Javascript implementattion of the algorithm that was convered to C#.
wwww.movable-type.co.uk - Convert between Latitude/Longitude & OS National Grid References

The following is a screen shot of my calculator showing some of the maths for the Moel Y Llyn Stone Circle. Probably not very pretty but very useful for working out bearings, distances, Grid Refs and generally checking results. It now calculates the rising and setting positions of the sun/moon assuming a rise or set over the sea.

SunAndMoonCalculator.zip - ZIP of the calculator
In order for the calculator to access height data, this must be stored within a folder called "%appdata%\SRTM Data\". The SRTM tiles (e.g. N27W013.SRTMGL1.hgt.zip) can be downloaded from 30-Meter SRTM Tile Downloader
EarthNumbers.xlsx - Simple Excel based calculator 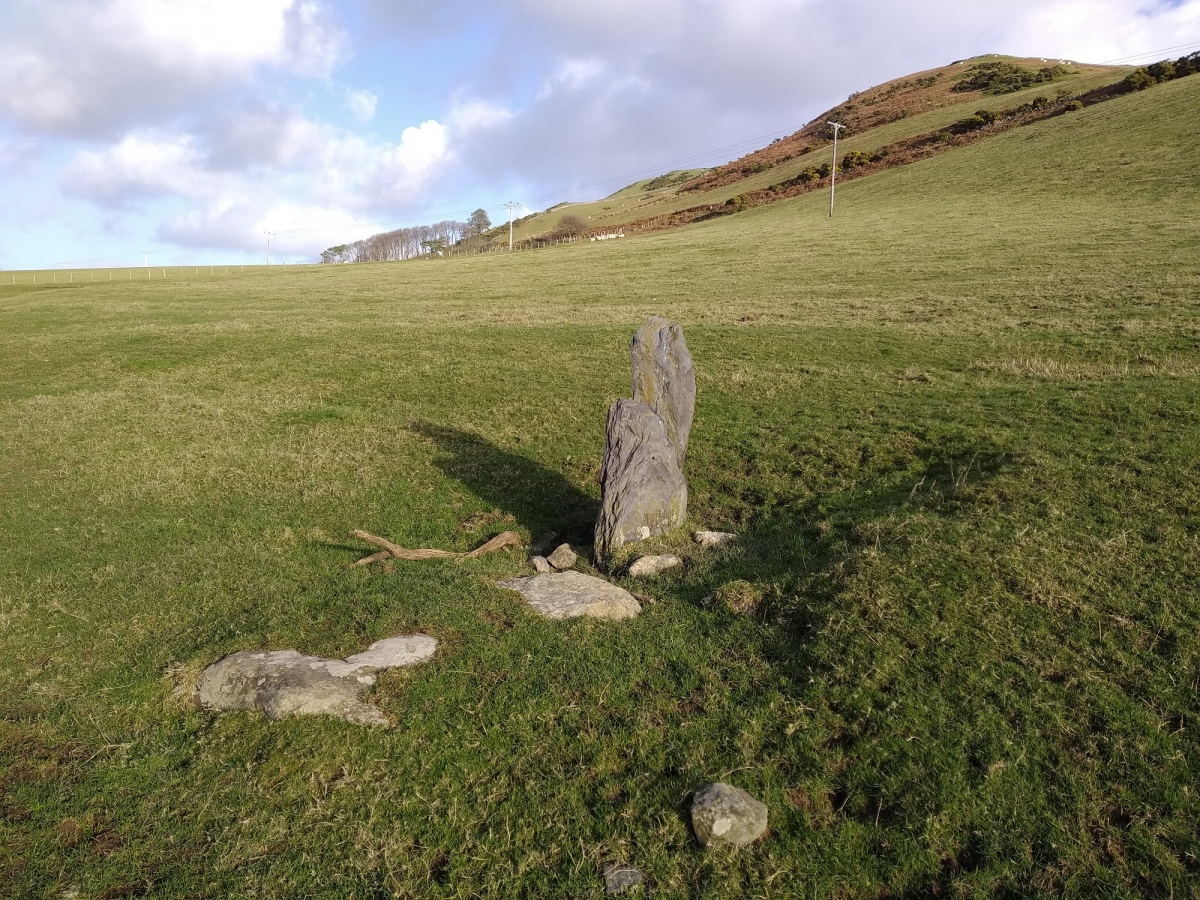